The Hocking River is a southeastward flowing tributary of the Ohio River with its mouth at Hockingport, Ohio, about 200 miles below Pittsburgh. The watershed is roughly rectangular in shape, extending in a southeasterly direction from the headwaters in Fairfield County to the Ohio River in Athens County. The watershed has a maximum width of 26 miles and a total drainage area of 1200 square miles, and lies entirely within the Kanawha section of the Appalachian Plateau Physiographic Province. The river distance from its source to its mouth is approximately 95 miles, flowing thru the cities of Lancaster, Logan, Nelsonville, Chauncey, and Athens.

The bottomlands along the Hocking River are generally flat and cultivated, and average about one-half mile in width. Most of the larger communities in the watershed are situated within the river valley, including the Cities of Lancaster, Logan, Nelsonville and Athens.

Throughout the watershed there is a system of dams and reservoirs, which provide flood reduction, water supply, and recreational opportunities. To name a few of these with notable size or impact include Stroud’s Run (Dow Lake); Lake Logan; numerous flood retarding structures in the Rush Creek Conservancy District; Lake Snowden; four lakes in the Margaret Creek Conservancy District; and the largest artificial lake in the Hocking River basin is Burr Oak Lake (Tom Jenkins Dam), which is a USACOE project completed in 1950. Additionally there are numerous flood retarding structures, and sediment control structures constructed by the Soil Conservation Service in the Upper Hocking Watershed.

The gradient of the river through both Athens and Hocking Counties is relatively flat, having slopes of roughly 2 feet per mile. This flat gradient is reflected in the numerous bends and meanders. Thus, floodwaters remain longer in valleys with such gentle gradients than in valleys with greater slopes. 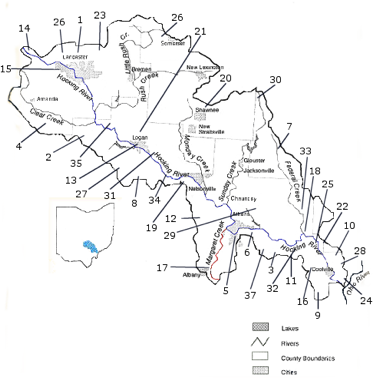