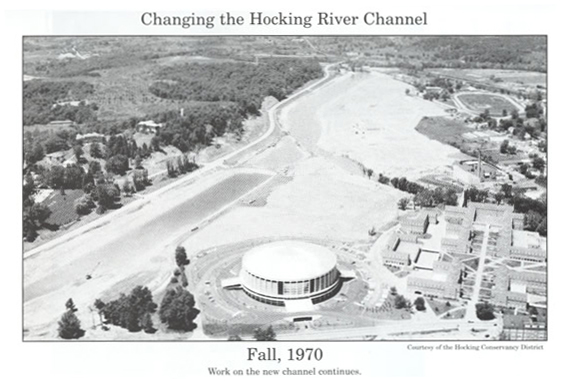 The Athens Local Protection Project (ALPP) did not become a reality overnight. According to Mr. Donald Johnson (the first secretary-treasurer of the conservancy district) there were studies of the Hocking River in August 1948, August 1950, and again in June of 1956. There was also a study of the Coolville area for the possibility of navigation in 1889. There were several more studies completed before the ALPP could become a reality.

In 1963, the Hocking River flooded the entire valley, including Athens, forcing many people to be evacuated from their homes. This flood event devastated the Hocking River basin, but it would not be the last time flooding would devastate the area. This was just one of the many floods that occurred in this valley, which eventually led to the formation of the Hocking Conservancy District.

Another major flood of the Hocking River occurred in March of 1964, larger than the flood in 1963. Flooding is but one of many natural disasters coming from Mother Nature that many communities are forced to deal with. This flood of 1964 caused large-scale damage, but it did have a positive effect (as odd as that sounds) in terms of flood control for the Athens area.

On March 11th, 1964 United States President Lyndon B. Johnson accompanied by Ohio Gov. James A. Rhodes and Mr. Fred E. Morr, (Director of ODNR) conducted an aerial survey of the area during the peak of the March 1964 flood. President Johnson expressed a keen interest in a finding a solution to this flooding problem. The State of Ohio had a concerned financial interest because of the several million dollars they had invested in the buildings for Ohio University; obviously they wanted to protect their investment.

Photographs from “As Time Goes By: A Pictorial Journal of Athens, Ohio” from the book by Marjorie S. Stone.

This would have been the scene witnessed by President Johnson.

At the request of the President of the United States, the USACOE began to study the Hocking River Basin. The Corps prepared and presented an interim report on solving the flooding problem by a river relocation and levee project for the Athens area, with further study to be given other LPP’s for the villages and cities along the Hocking River and a reservoir on Clear Creek in Hocking County. This report was submitted in March 1965.

To briefly touch on the long process of seeing the Athens project become a reality, numerous agencies had to review and agree on the plan. Each of the following agencies were required to review the plan; The Corps Division Office in Cincinnati, The Chief Engineers Office in Washington, The Board of Engineers for Rivers and Harbors, The House and Senate Committees on Public Works, The House of Representatives, and the U.S. Senate. After the acceptance of these different agencies Congress finally authorized the ALPP in December 1965.

Being authorized does not mean that the money has been made available to construct this project. The COE needed funds to develop the plans and design for the ALPP. Congress appropriates money for Public Works Projects once per year. This is one of their last acts before they adjourn for the year. The COE didn’t receive this appropriation money for planning until December 1966.

Planning money is not construction money. During the next Congressional session initial money for construction was in the appropriation bill passed in 1967, for $200,000.00. Construction was scheduled to start in 1969, with a $1 million item in the Presidents budget for the next fiscal year.

Among some of the obstacles that the District had to address for the ALPP were the accommodation for the location of Sheltering Arms Hospital (O’Bleness Memorial Hospital); plans for Ohio University; B&O railroad; ODOT extension of SR 682 through the State Hospital grounds from Route 56 to Richland Av. which required re-alignment of the channel and moving the bridge at Richland Av.; ODOT bypass with the SR 33/50 highway with interchanges at E. State St., and Stimson Av.; removal of the Mill St. bridge and construction of a replacement bridge at Stimson Av.; ODOT requiring the allowance for 2 new bridges crossing the Hocking River at the east end of Athens to pick up US Route 50; in which all of these changes required the project to be lengthened by about 1 mile from the original plan. To name a few but not all of the other considerations for this project to proceed were the relocation of sewage lines under the channel, which required a new lift station to be constructed at Richland Av. in order to tie into the existing sewage lines; and the relocation of other utilities.

The project involved acquiring the necessary lands, easements and rights-of-way, relocating the Hocking River, installation of three storm water pumping stations, revision of the storm sewer lines, along with the necessary street and bridge considerations.

This photograph taken from the book by Marjorie S. Stone, titled “As Time Goes By: A Pictorial Journal of Athens, Ohio” shows the old Mill Street crossing.

According to the caption, this bridge was an all-iron structure started in 1902. It spanned one hundred and forty-six feet. Age had taken its toll on the bridge and was demolished when the Athens Local Protection Project was built in 1970. A bridge just a few hundred feet downstream at Stimson Avenue, served as its replacement.

Although the design project for Athens provides excellent protection against flooding, there remains the potential for damaging floods. 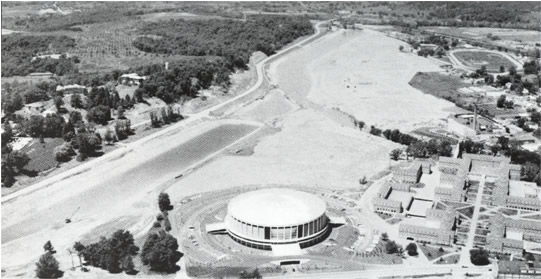 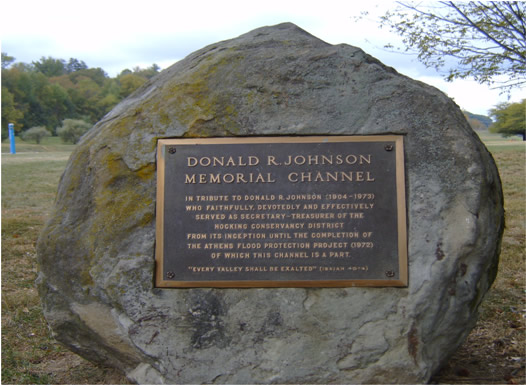 In tribute to Donald R. Johnson (1904-1973) who faithfully, devotedly and effectively served as Secretary-Treasurer of the Hocking Conservancy District from its inception until the completion of the Athens Flood Protection Project (1972) of which this channel is a part. “Every valley shall be exalted” (Isaiah 40:4)

This plaque dedicated to Mr. Donald R. Johnson is located on the left bank, west of Richland Avenue, between the Hocking River and the Silas Bingham House (formerly the Ohio University Visitors Center). This is the site of the original ground breaking ceremony for the Athens Local Protection Project.