The greatest flood for which more or less complete information could be obtained occurred in 1907, with a river stage of 27.4’. Tragically, there were seven lives lost during this flood; according to one article in The Athens Messenger, Mr. Otto Barth drowned while trying to rescue members of the John Dana Family.

The highest flood recorded since collection of stage data was initiated occurred May 25, 1968 with a crest of 24.65’ and a zero gauge of 614.81’ above mean sea level, at river mile 31.62 (Athens). This flood would have been 2.75’ lower than the great flood of 1907. It was reported in the Columbus Dispatch that this flood left three people dead in southern and southeastern Ohio and an estimated “millions” of dollars in property damage.

Statistics of Flooding of the Hocking River at Athens 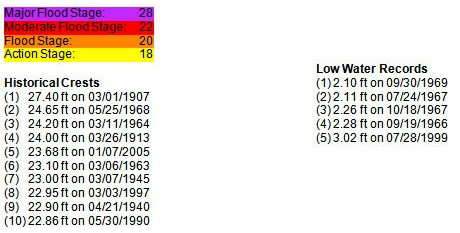 Prompted by substantial flood damages, the Athens Local Protection Project was authorized by the 1965 Flood Control Act, House Document No. 287, 89th Congress. The project, as shown on Figure 2, was constructed by the Huntington District and was completed in 1971. The improvements consisted of realignment, straightening and enlarging 26,000 feet of the channel to a bottom width of 215 feet. The project begins approximately 1000 feet downstream of the U.S. Route 50 bridge (current river mile 29.4) and extends upstream to the site of the White’s Mill Dam (current river mile 34.387). The improved channel shortened the river length through Athens by approximately 1,400 feet.

The material excavated from the new channel was used to fill abandoned portions of the original channel, to fill low areas adjacent to the new channel, and to construct a spoil bank between Richland Avenue (river mile 33.05) and Mill Street (river mile 31.61). This spoil bank is about 7,900 feet long with a top width of 100 feet and a top elevation varying from elevation 640.0 at Richland Avenue to elevation 638.5 at Mill Street. Although it was not designed as a levee, limited protection is provided to the area behind the embankment for floods of short duration. Spoil was also used to construct a second low bank that is approximately 400 feet in length along the left bank of the Hocking River between State Route 56 and the B & O Railroad at an elevation of 647.5. A large area north of State Route 56 is protected from short duration flooding by this spoil bank.

The flood of March 1964, the maximum recorded flood at Athens prior to the study for the GDM, dated March 1968, was selected as the design flood for the project. This flood had a peak discharge of 32,900 cfs at the former Mill Street gage. The design level of protection has been stated to be approximately 60 years. However, current hydrologic records indicate that a 40 to 50-year frequency is a more appropriate estimate.

In addition to the channel improvement project, a limited degree of protection is provided by Tom Jenkins Dam and Burr Oak Reservoir. This project, located 57.2 miles upstream of the mouth of the Hocking River in the Sunday Creek Basin, controls a drainage area of 32.8 square miles and generally reduces flood heights at Athens by 0.2 to 0.3 feet, depending on the magnitude and characteristics of the floods. Other damage prevention measures are confined to limited floodproofing, which has been applied to some individual buildings, particularly those constructed since the floods of 1964 and 1968. Most of Ohio University’s new structures have been designed with main floor levels raised above the natural floodplain either by earth fills or by restricting ground level spaces to uses subject to limited damage, such as parking.